“Why does my dog follow me everywhere” was never a question I asked until my life was graced by a dachshund. Sure, there have been other dogs in my life that would follow me often. But Paul has taken this game to an entirely new level! No shower, bathroom break, meal, nap, chore … quite seriously NO activity is complete without Paul following behind me.

Very recently, Paul was struck by vestibular syndrome and was down and out for many days. I spent most of my waking hours caring for him in one way or another. But when I had the opportunity to take a few moments out for myself, I felt terribly uneasy when my sausage-shadow wasn’t behind me. I didn’t hear the familiar sound of him following me across the wood floor. He wasn’t waiting for me after my shower. He wasn’t sitting under my chair while I ate or worked at the computer. It was then that I felt the full force of just how much he had infiltrated his little body into EVERYTHING I did.

There are differing opinons regarding this question as there are several breeds that have the tendency to follow.  Therefore, I have no clear-cut answer for you.

On the other hand, considering my experience with Paul and having spoken to numerous other dachshund owners … there seems to be a tendency towards this “following behavior” in the dachshund. Not only that, it’s also worth considering their origin … Germany.

WHAT’S GERMANY GOT TO DO WITH IT?

In Germany, a dachshund is known as a “Dackel.” Keeping in mind that Dackels have had a long history in Germany, it should go without saying that this has given the Germans a long time to study the behavior of the dachshund. What have they found? Let’s just say that the “Dackel” has changed the German vocabulary!

Today in Germany, a “Dackel” is not only the sausage-shaped dog we’ve come to love … “dackel” is also a verb! I’m serious! What does the verb mean? To put it simply, to “Dackel” means to walk in the manner in which a Dackel does; with a kind of wiggle or a dance in his step. And this verb can apply to anything or anybody who moves this way … including humans.

“Hinterherdackeln” is more proof that dachshunds are known to follow! And what’s more, it’s the only breed recognized for this behavior in the form of a word.

Well, I’m afraid there isn’t one reason for this phenomenon. In fact, the answer is usually dependant on more than one factor that are unique to your situation. Some things to consider are:

The breed of your dog: Unlike the dachshund, there are dogs who tend to not only follow, but also to herd their people. Of course, I am referring to the “herder breeds” (e.g. Shepherds, Collies, Sheepdogs, etc.). “Worker breeds” also tend to attach themselves to their humans (Huskies, St. Bernards, Malamutes, etc.).

Your role within the pack: Whether you’re in the “alpha” role or you’re the one who typically feeds, plays with and gives treats … you will likely be followed! Let’s be realistic, wouldn’t you follow the good stuff?

Fear of abandonment and separation anxiety: For example, was your dog a rescue? Are you aware of his history? Some dogs who’ve been treated poorly or abandoned in the past can develop separation anxiety later.

In Paul’s case, there are three considerations. Aside from the fact that he is a dachshund (and thus has a tendency towards “dackeling”), his previous owner passed away before we welcomed him into our home. Once he became comfortable with us, we began to see signs of separation anxiety and found it very difficult to leave him alone without him having a panic attack. However as we later discovered, separation anxiety can be very common in dachshunds … regardless of their history. See what I mean? It can be very difficult to nail down only one reason for your dog’s attachment and “following behavior.”

I LIKE THAT MY DOG FOLLOWS ME. IS IT ACCEPTABLE BEHAVIOR?

Certainly it can be kind of cute and even flattering to have a buddy that is so enamored with you. But at some point you have to ask yourself if it’s healthy for the dog. Certainly in the case of separation anxiety, it’s not healthy behavior and can cause lasting damage to him. Not only that, it can make your life very difficult if you work outside the home or if you simply would like to go out without your dog. Try having a romantic date with your partner when your dog has separation anxiety!

SO WHAT CAN I DO? 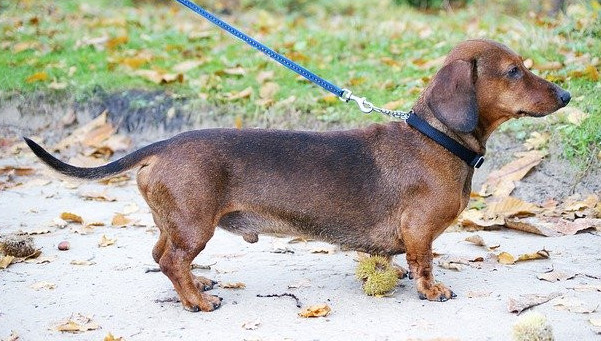 Unfortunately, there are no easy answers to eliminate separation anxiety. To see improvement, you will need to approach it from more than one angle.

First and foremost, the situation calls for a lot of patience and positive reinforcement while you work to change his behavior. Also, consistency! Don’t give up before he’s had the chance to learn!

Educate yourself on the subject of training and don’t be afraid to ask for help from a professional trainer or dog-behaviorist. Your veterinarian is also a good resource for advice.

In addition to proper training, make sure your dog gets plenty of exercise. Play with him and walk with him regularly. Introducing him to other dogs might also be helpful.

Finally, in severe cases of separation anxiety, you may need to consider medical intervention. Your veterinarian may prescribe medication to help calm your dog.

Paul is much older now and although there was a time when I could leave him alone for a bit, those times don’t happen much anymore.

He is now vision and hearing impaired and sometimes gets a bit confused. Because of this, his bed is in our bedroom as he has a tendency to wake up and get stuck in different places when he walks blindly about. When he’s near us, I can hear if he has any problems. These problems have caused a bit of anxiety in his little life but anti-anxiety type medications are not an option for him.

However, I’m very fortunate to be able to work from home. Fortunate for me, fortunate for Paul. Leaving him for hours at a time is not necessary and I probably wouldn’t do it anyway. So, Paul’s anxiety is decreasing.

Oh, he still follows me most everywhere. But he recently started following my husband as well. My husband is overjoyed and I’m a bit relieved. Good for everyone!

And in closing … please enjoy this snippet from “Crusoe, the Celebrity Dachshund” …

11 thoughts on “Why does My Dog Follow Me Everywhere? Please explain!”